The Rockefeller dynasty has been one of America’s wealthiest and most powerful families for over 140 years. Similar to the Kennedys, Vanderbilts and Du Ponts, the Rockefellers are old money, influential in the country’s politics and business and deep pockets for charity.

The Rockefeller legacy began with brothers John D. and William, who were co-founders of Standard Oil. In the Rockefeller family, individual family members didn’t make their money and go separate paths. Instead, the family worked together to achieve common goals in business, politics and society.

David Rockefeller was the youngest and last of the six children of John D. Rockefeller, Jr. and grandson of the oil magnate John D. Rockefeller when he died in March at age 101 – worth over $3 billion at the time of his death. David was chairman and CEO of Chase Manhattan, owned large real estate holdings and an important art collection that will be auctioned next spring. His wife of 55 years, Peggy, died in 1996. Over their lifetime, David and Peggy gave an estimated $900 million to charity.

In his will, the bulk of David’s estate went to charity after the family trusts were divided between his five surviving children. Though most properties were donated to historic land preservation trusts or land conservation, several properties were offered first to his children who were welcome to buy them at fair market price. The proceeds would then be added to his charity funds. These properties were the East 65th Street Manhattan townhouse where the couple raised their children along with two properties in Maine and one in Columbia County New York. If the children passed on the properties they would be placed on the open market. Such is the case with the Manhattan townhouse that David owned for almost 70 years.

Constructed in 1924 for New York financier, railroad and real estate magnate Adrian Iselin, the Rockefellers purchased the Georgian-style townhouse on East 65th Street in 1948. With four levels spanning its 40-foot-wide property, the mansion encompasses 9,777 square feet of living space with a basement adding an additional 2,465 square feet. The garden area is planted in mature silver birch trees and shrubs with a moss and brick-paved terrace providing lush green views from inside the home. Arched windows, ornamental cast-iron entry gates and window guards along with the reddish brick exterior add a stately and welcoming entrance to the mansion.

With the Upper East Side location where they entertained many of the world’s business and political leaders, the couple engaged the popular society architect Mott Schmidt in the 1970s to redesign the interior in keeping with the Georgian style. He created a well-proportioned layout, large rooms with tall ceilings and windows for entertaining and more intimate rooms for the family. There are eight bedrooms and eleven baths, formal dining and living, a sitting room with garden access, library, eight fireplaces and a large wine vault. In addition to the circular stairway with red carpeting that ascends to the top level with a skylight at the pinnacle, there are six staff rooms and an elevator. Listing agents are Mary Rutherfurd, Paula Del Nunzio and Leslie Coleman of Brown Harris Stevens in New York City.

Find history, elegance and tradition in the much-loved East Side Manhattan townhouse of David Rockefeller and his wife Peggy where they entertained international dignitaries and enjoyed their family and friends. Priced at $32.5 million. 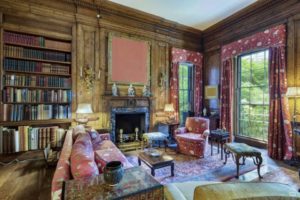 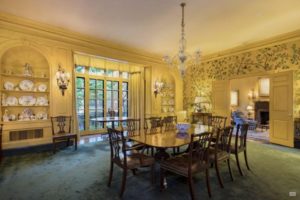 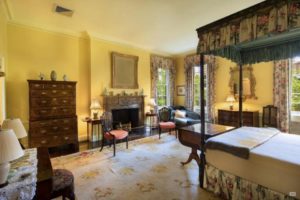 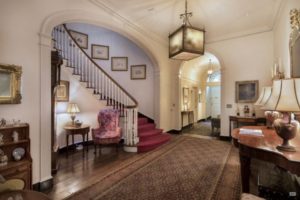